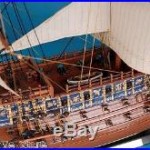 She was later renamed Sovereign, and then Royal Sovereign. History HMS Sovereign of the Seas was built by Peter Pett (later a Commissioner of the Navy), under the guidance of his father Phineas, the king’s master shipwright, and was launched at Woolwich dockyard on October 13, 1637. As the second three-decked first-rate (the first three-decker… (read more)