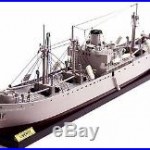 History of the O’Brien. Jeremiah O’Brien slid down the ways at the New England Shipbuilding Corporation in South Portland, Maine. Named for the first American to capture a British naval vessel during the Revolutionary War, the O’Brien made seven World War II voyages, ranging from England and Northern Ireland to South America, to India, to… (read more)